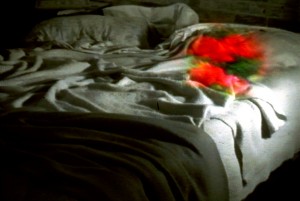 A woman drinks tea, washes a window, reads the paper– simple tasks that suggest a desire to fill time with either movement or thought.  Sometimes she hears the rhythmic, pulsing symphony of crickets in a Baltimore summer night. Other times jangling toys dissolve into the roar of a jet overhead, or children tremble at the sound of thunder. The small home-movie boxes within the larger screen are her gestural forms of memory, clues to her childhood, mnemonic devices that expand on the sense of immediacy in her “drama.”  These are the empty moments of a waking mind.   (Lynne Sachs)

Presented in a very bare bedroom-like space with a window, two chairs, a bed, a small old fashioned television, a throw rug and a bookshelf.  Gallery visitors are allowed to walk in the space, sit on the chair, and lie on the bed.

Above the real bed, we see the  black and white representation of another bed with a moving colorful image on one pillow.  In contrast to the noisy immediacy of the day, this bright red image of azaleas is fleeting, nocturnal, imprecise.  It is merely a remnant of a small desire.

Before the real bed, a small black and white television screen becomes the transition between the day of the woman at the window and the night of the bed.  Once again, we are witnessing a relic of a human presence, a state of unbelonging in which the mind moves between here and there without ever truly inhabiting anywhere.  On the screen, we watch the shadows of a person moving silently through a domestic space.

REVIEW
“Witnessing a relic of a human presence, a state of unbelonging in which the mind moves between here and there without ever truly inhabiting anywhere.   Horror Vacui makes us ponder why we seek constantly to fill our minds with words, music, clatter, stuff.  At first glance, the installation seems to consist only of a bedroom and three ever-changing videos.  Stay awhile.  As you soak up your surroundings with its soft lighting, constantly moving images and shadows that flicker against the sparse furnishings — your mind wanders.  On screen images of ordinary objects seem weirdly evocative.  A duster complete with a bushy top of feathers begins to resemble a palm tree.  You will discover that a great deal is happening, some of it inside your own mind. But the magic of the installation occurs in the moments between sounds.”  (“Portfolio”, The Baltimore Sun, Holly Selby) 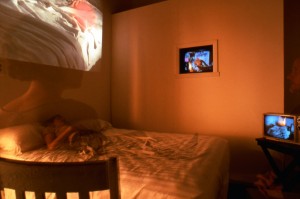 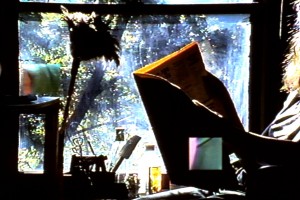 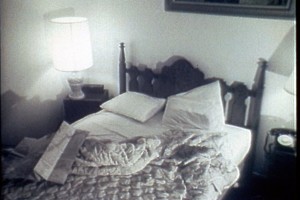