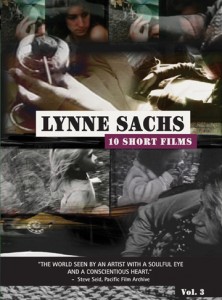 Film and Videos on DVD

“Lynne Sachs is best known for her spirited and lyrical essay films—films defined by an unwavering woman’s inflection and a commitment to pry the cracks in official history. However, throughout Sachs’s career, we’ve been treated to a succession of short experimental works that tease out the details of the everyday with the same clarity of vision and instinct for the hand-nurtured image as her much-lauded lengthier works. These films and videotapes, whether they be mystified glimpses of childhood, reinventions of films past, or formal excursions into the poetic, surrender the wonder of a world seen by an artist with a soulful eye and a conscientious heart.”
–Steve Seid, Film-Video Curator, Pacific Film Archive

“Equal parts humanist and formalist, poet and historian, telling tales that are both timeless and political, Lynne Sachs creates film worlds in which the textures of daily domestic life are seamlessly connected to the realms of war, political activism, and our response to terrorist attacks. In one film, a grid becomes a secret map for understanding the difference between male and female. In another, an affectionate portrait of her young daughter becomes a study of whirling circular energy. For each of these ten shorts, Sachs creates a unique film language, by weaving together images, sounds, and words that evoke a particular way of viewing the world. All of these works reveal a sensibility that refuses to flatten either life or art, insisting on a multilevel reality in which the personal and the universal become doorways to a broader consciousness.”
–David Finkelstein, writer for filmthreat.com

“Profound, the soundtrack amazing….the image of the girl with the avocado seed so hopeful.”
–Barbara Hammer, filmmkaer