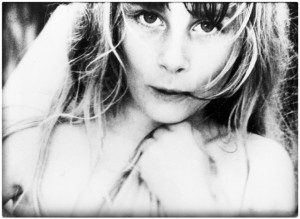 Thoughts on the Films of Gunvor Nelson
by Lynne Sachs

Last winter in New York was a particularly hard and, at times, distressing one.  The cold dominated every crevice of our consciousness and our conversation.  We just were not used to bundling up from November to March and so there seemed to be nothing left to do but complain.  And so, it is with pleasure and bemusement that this winter, like every other of her life, I watched my sixteen year old daughter pull out her delicately knitted woolen cap.  This soft, somewhat worn, blue, yellow, green and white hat sparks a profound reverie in my mind; it simultaneously takes me back in time and sends my creative juices spinning into the future.  The cap has certain qualities that absolutely cannot be ignored.  Made in 1995 by my former graduate school film teacher for my daughter Maya as a gift for her on the occasion of her birth, the hat has  not only kept her warm but also grown – magically – with her head.  This object of much adoration has also allowed me to describe to my daughter Maya in vivid detail my teacher, friend and inspiration — Gunvor Nelson.

The first time I saw Gunvor’s brash, feminist 1966 moving image carnival “Schmeerguntz”, I was about 25 years old, still too young (I thought) to identify with her funky discourse on motherhood and domesticity. In a sense, I watched Gunvor’s cinematic collaboration with her friend Dorothy Wiley as a child might furtively read her mother’s journals. Much more was revealed than I wanted to know, and so I felt like turning my head from the chaotic clutter of home-life and parenthood that Gunvor had splashed across her screen.   I wanted to close my eyes, and yet I never did.  Her wild, hilarious, courageously “vulgar” images seeped directly into my burgeoning artist’s psyche. Just a few years later I made “The House of Science” (1991) and “A Biography of Lilith”, my own two filmic discourses on my body and becoming a mother.  Only now, in writing this essay, am I beginning to come to terms with the powerful influence that “Schmeerguntz” had on these two works.

By 2001, it had already been a decade since Gunvor had moved from San Francisco, where she had been my mentor and later friend, back to Sweden.  I too had left California and was living a peripatetic life between Baltimore and Brooklyn (now my permanent home) with my husband and two young daughters.  One spring afternoon, I was standing in my backyard watching Maya play in the grass.  As I stared intently at her, I realized that my relationship to her fleeting youth was now somehow similar to Gunvor’s  with her own daughter in her film “My Name is Oona” (1969). In this film, Gunvor stares at Oona who is riding with blissful abandon on a horse at the beach.  Oona is free to run with the animal wherever she may choose, and yet she is somehow lovingly reigned in by the gaze and concern of her mother. Through the fabric of the celluloid in both its clarity and its obscurity Gunvor weaves an intimate, oneiric homage to her daughter.  On the soundtrack (recorded with Patrick Gleason and inspired by American composer Steve Reich), she creates a musical litany made of the sound of Oona speaking her name over and over. Perhaps it was seeing this film that compelled me to pull out my 16mm camera to film my daughter running as many circles as she could before falling dizzily to the ground.  I called this short cine-poem “Photograph of Wind” (2001).

Just three years before I actually met Gunvor while studying with her at the San Francisco Art Institute, she completed another cinematic meditation on the fraught, exhilarating dynamic between mothers and daughters. In “Red Shift” (1984), Gunvor produced a remarkably complex, exquisitely observed rumination on the small gestures – both physical and emotional – that transpire between women of different generations.  Though my own mother, a sociologist with a keen interest in family dynamics, had spent much of her career observing these relationships, I saw in Gunvor’s film a level of seeing that articulated emotional fracturing in a way that words alone could never express.  While both Hollywood movies and earnest social-issue documentaries were grappling with the drama of the family in their own, usually formulaic, ways, Gunvor’s approach was radical, visceral, earthy and somehow through it all exquisite. The film spoke to the artist, the woman and the daughter in me.  Only many years later was I able to draw from it as a mother and a filmmaker.

Twenty years ago, just as she was beginning her move back to Sweden, Gunvor completed “Time Being” (1991), the most wrought, candid film on the act of dying that I have ever seen.  “Dying” is a verb, it is alive, it is part of the cycle of life.  In this film, Gunvor stares intently at her mother, a woman whose body has been devastated by the challenges of her last days on this earth.  In three astute shots, Gunvor looks with honesty rather than awe at a woman whose spirit has somehow flown away but whose body still demands a share of our time and our space. Through the film she is still “there” and “here” in the ways that only cinema can manage to do.  In watching this film, I realize that I have come full circle with Gunvor.  I have watched all the phases of existence in a brief 83 minutes, not a very long time in the scale of a year, or a century or a millennium, but somehow just enough to express the joy and the pain of being.