In the spirit of Pratt Institute’s RIDE (Risk/Dare/Experiment) series, filmmaker Lynne Sachs and a group of six Pratt film students present their own short film-performance as a finale to Lynne’s “Taking a Documentary Detour” talk. During a workshop held in the film department at Pratt Institute, each student created a composite character built from both autobiography and fictional discoveries. Expanding upon the theme of the bed in Lynne’s hybrid film Your Day Is My Night, the students utilize the bed as a starting point for inquiry into the personal and collective experience of living in a New York City apartment or dormitory.    Archival film footage of people in their beds throughout the history of cinema forms a backdrop to the entire performance.

Co-sponsored by the Pratt School of Art and Design, the Department of Humanities and Media Studies, the student club Film Cult and Bomb Magazine.

RiDE is a new series of events organized by the Pratt Institute’s School of Art and Design that features invited artists, as well as Pratt faculty, staff, and students across departments and disciplines.

RiDE sessions bring various processes related to artistic and design practices into a visible arena while illustrating the unforeseen outcomes of experimentation—ventures that open up new paths, abandoned projects that lead to new insights, and other types of risks that inspire adventurous ideas and actions.

In Taking a Documentary Detour, Sachs  discusses her associative, non-literal approach to images in the context of her new enthusiasm for mixing fiction and non-fiction modes of production. Recently, after 25 years of making experimental documentaries, Sachs noticed something that turned all her ideas about filmmaking upside down.  She was working on Your Day is My Night , her film about Chinese immigrants in New York, when she came to see that every time she asked a person to talk in front of her camera, they were performing for her rather than revealing something completely honest about their lives. The very process of recording guaranteed that some aspect of the project would be artificial.  “I had to think of a way to subvert the rigidity of both the documentary and the narrative model, so I decided to invite the people in my film to work with me to make the film, to become my collaborators.”  In her lecture, Sachs will explore the austere yet playful dramaturgy of French theater director Ariane Mnouchkine (Theatre du Soleil), Augusto Boal’s Theater of the Oppressed, the Wooster Group’s high-tech stage shenanigans, and Chinese director Jia Zhangke’s mixing of artifice and truth.  She  shows clips from her own films, including The Last Happy Day (2009), Wind in Our Hair (2010) and Your Day is My Night . 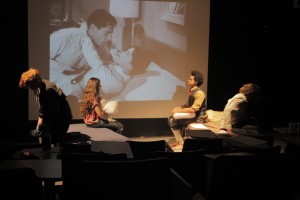 BOMB Magazine published this interview with Lynne by poet Paolo Javier today. They talk about poetry, documentary, politics and personal histories. BOMB is a sponsor of the RiDE (Risk, Dare, Experiment) lecture.

Conceived and directed by Lynne Sachs

During Lynne Sachs’s RiDE workshop, each student created a composite character that combine autobiography and fictional discoveries. Sachs asked each student performer to imagine a situation from the past that might have occurred in the room where they currently live. Each participant then wrote and performed a monologue that could have been spoken by the fictional person who lived in the room.

Play begins. Performer 1 sits on the left and across from her, Performer 2. Each holding a pillow and blanket.

Performer 1 gently folds out her sheet and starts arranging her bed while Performer 2 flops down.

I’m not going to answer that, they keep insisting. I haven’t even gone to any of them. I hate these High School reunions.

I can’t find anything in this place. It would help if someone else was looking here. That they have clothes for both men and women. But it’s okay you know. He pays me and kinda reminds me of my daughter. Haven’t been able to sleep very well. Vera the soul cleanser she says that my mom use to be a slave owner in a past life. And that’s why I can’t sleep cause the spirits are haunting me. She gave me this…

Performer 1 grabs an unmarked spray and starts spraying around her

It’s to keep them from bothering me. My daughter thinks it’s all bullshit, at least that’s what she says when we talk over the phone.

Performer 2 lets out an audible groan.

Performer 2 stands up from bed

Alright, A-Alright buddy you need to go. (Motioning for the person in her bed to leave) Yeah here, here take your shoe. Upstairs. Alright I’ll call I promise… Yeah totally… Aw Fuck. Shit what time is it?… Fuck me… Aw God… Aw fucking shit… Too early for this.

COU—COUGHHH   Performer 2 tries to clear their through before dialing a phone.

Hey Pops what’s up man…Yeah Dad whaddup… Yeah I’m good. Yeah I just got back from the gym… Yeah 17 reps now, Yeah I’m jacked as shit man… Yeah you watch out man I come back and pfffft… Yeah hold on let me put you on speaker for a second.

Places the phone down

How ya doing Dad. I’m good. Totally Man. Yeah college is the shit man. Like totally. Oh yeah I’ve made some good guy friends this year. Yeah I was gonna talk to you about sports this year I don’t think… No I’m good I’m good. I don’t think I really wanna play… No this is not like Berkeley again Dad I told you I can’t I can’t talk about this right now. I don’t want to be like you and every other guy in the family, I just want to do some art, what’s so wrong about that? Look dude you gotta’ hear me out…fuck…Look I don’t want to talk about this right now. I’m about to go out with some friends. Aha we are about to go to a club… Yeah condoms pfffft… Of course I have condoms, yeah dude totally, I’ll tell you about all the bitches dad… aha yeah, yeah… look dad I’ll call you later. I really don’t want to talk about this right now… ahah yeah, bye now.

Performer 2 (There is a noticeable change in their voice)

Performer 2 lays back down on the bed.

Two new performers —who we’ll call 3 and 4— enter stage and sit across from one another, one on each bed.

March 11th 2014. Not a lot of UFO’s today. Lotta’ planes but no UFO’s. Oh my lord it’s beautiful out. All the children on the street are just playing.

Something catches their attention and Performer 3 motions at it

Performer 3 moves across stage to a kitchen

Hey uh… Did you remember to take the water down from the roof…that’s alright I guess I won’t make pasta… (Walking back to her bedroom window) I don’t know what that girl does all day she just doesn’t do anything, just stays in her room. There he is again. You see this guy? Every single goddamn week! I been here 40 years ain’t no man from the city gonna take this away from me. This is my home.

Performer 4 sits up in bed

AHHH — Pounds her fists into her bed

Performer 4 paces back and forth

It’s so fucking loud in this place all the time. All the time that goddam fucking cat – jesus christ. The cat snores, fuck. No I didn’t get the water off the fucking roof. Why am I supposed to melt snow to get water. This apartment is disgusting. It’s trashed. There’s always some shit around. Cause you never leave, she never cleans up. She watches kids out the window like a fucking pedophile… FUCK… Just want her to leave, think it might kill her though. She steps outside she might trip and fall on her fat ass. So sick of not being able to find anything. It’s not even my shit… Cat poops on my bed one more time I might punt it out the window.

Performer 4 takes a gulp of water to wash down a pill before pulling the covers over.

Ah Juan, you like jazz yeah? Father loves jazz, think I got it from him. My father’s a West African jazz musician and he’s always played African and American jazz. He actually left me a crate full of old records that I haven’t had a chance to look through yet, so that’s what I plan on doing tonight. (Starts to flip though the records) You like Miles Davis yeah? Bitches Brew— That is a nice cover.

Performer 5 pulls out the record… Bwfooof…blows the dust off it. Then takes a very DEEP breath in.

That is good music. It’s really good to relax to. My mother’s really into her culture too and I promised her that um, I would wake up before I wake up and before I go to sleep so if you don’t mind

Proceeds to do tai-chi

That’s enough of that.

Picks up the crate of records and puts them away.

You know Juan, I was thinking, if I were to die, hopefully I’d make it to the upper 80’s. If I were to die I would go to heaven, hopefully I’d make it to heaven, if when I get to heaven, if God was a DJ, which I’m sure God would be a DJ, and God were playing music which I’m sure would be jazz and God was playing Miles Davis. If I had to pick one Miles Davis song that God was playing, now I’m not an atheist, but I think if God were to play a Miles Davis song it would be… So What… Good night.

Performer 6 then kneels before her bed and prays.