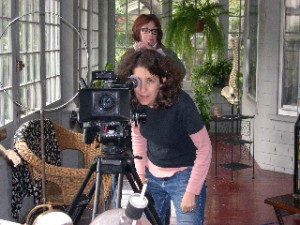 “In 2009, I completed The Last Happy Day, a film that uses both real and imagined stories about Sandor Lenard, a distant cousin of mine and a Hungarian medical doctor. (See text above for description). Several years ago I traveled to Sao Paolo, Brazil to film Sandor’s eighty-five year old wife, Andrietta. She described in vivid, almost dreamy, detail her husband’s macabre work. I listened to her recount his daily contact with the detritus of war, wondering to myself why we so rarely think about who is responsible for “cleaning up” the dead. Later in the film, Andrietta’s graphic, realistic recollections stir visual ruminations on this futile act of posthumous, cosmetic surgery.

“In my previous films, the elusiveness of the biographical impulse pushed me to interweave home-movies, found footage, interviews, and actual letters as a way of exploring the intricacies of my subjects’ lives. Stylistically, I developed a discursive way of working that integrated authentic materials with more artificial, constructed visuals. With The Last Happy Day, I constructed a narrative triangle between Sandor, my Uncle William and myself. While their presence in the film is grounded in a dialogue from the past, my participation is more temporally and geographically fluid, creating an evolving relationship of distance and intimacy through voice and text.

“Early in the film, I jump right into a reverie that introduces Sandor’s strange understanding of the human body—in death and in life. Through an evolving, highly saturated visual language, I contrast the haunting confinement and violence Sandor experienced in Rome during the Nazi occupation with the verdant emptiness of his later life in remotest Brazil. I juxtapose Sandor’s fearless introspection in his unpublished letters with my imagined visualization of his idyllic life in his house in the woods. The geography of his NOW simultaneously saddens and protects him from the threats he fears are still percolating on the other side of the Atlantic. As a way of articulating his longings, I project images from Roberto Rossellini’s hauntingly sad feature film Rome, Open City onto an array of reflective surfaces in Sandor’s vine-covered house in the woods of Brazil.

“Always an exile, a victim of a kind of human ‘continental drift,’ Sandor never felt ‘at home’ in the synthesized post-war euro-culture he found in Brazil. Building a harpsichord on which to play Bach, reading thirteen languages and translating Winnie the Pooh into Latin allowed him to stay connected to an old-world life to which he would never return. Through the visual texture of this film, I use images of landscapes as proscenium, and even as character. The camera searches for familiar terrain, names, and identifiable landmarks: zones of danger, safety, comfort and despair.

“In all honesty, I’ve wanted to make a film about my distant cousin Sandor for over twenty years. His was the only branch of my family that remained in Europe during World War II. During the production, I traveled to Dusseldorf, Germany to meet Sandor’s son, Hansgerd, now in his late sixties. As I stood with my camera, he uncovered a trove of family diaries, letters and inscribed books from the 1920’s and 30’s. Inside each book, Sandor and his parents had meticulously transformed their obviously Jewish name “Levy” to a more Hungarian “Lenard”. Rather than destroying this direct reference to their hidden family identity, Sandor’s family, my sole remaining European relatives, meticulously erased. In their minds, the key to survival in early twentieth century Hungary would be pristine assimilation. My own southern Jewish family in Memphis also refused to grasp fully the catastrophe that was Europe. With far less to lose, their methods of confronting eminent danger were similarly subtle. Keeping this legacy of detachment in mind, I try to create narrative distinctions between close and remote experiences of war. As Sandor’s world fell into a state of hunger and decay, he delighted in the absurd and the arcane. Humor was his life raft, his potent means of resistance. Speaking, reading and writing Latin kept him from what Natalia Ginzburg, another writer trapped in Occupied Italy, called ‘the fury of the waters and the corrosion of his time.’ Through images and writing, implicit connections to our own wartime situation push their way into the fabric of the film.

“Throughout this episodic story, I also work with a cinema-verité style scene of four children (including my two daughters Maya and Noa) grappling with the challenges of putting on a play of Winnie the Pooh, the book Sandor had, strangely enough, chosen to translate into Latin. The children’s extemporaneous conversations express an awareness of both the English and the Latin versions of Pooh, as well as the philosophical ponderings implicit in the text. In my mind, the inclusion of this quintessential sliver of innocence allows me to explore the implicit paradoxes of a life both thwarted and nourished by the contradictions of a troubled time.” (Lynne Sachs)