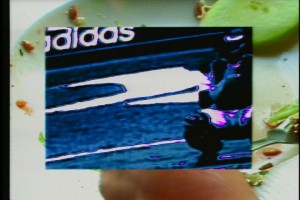 
Street and Sachs, a Brooklyn filmmaking couple,  negotiate the thin line between representation and abstraction in each second of this moving image extravaganza. Created in the grand tradition of the Cartesian and chromosomal construct, what looks like a tree can quickly turn into a train, a telephone pole or an angry bowl of soup, as our audience hangs on for dear life. Sachs makes theatrical gestures and tableaux using hands, toys, a plate of cherry pie, and a miniature of the Empire State Building.  Street produces photochemically conjured flowers, fishing tackle, and shards of found film – – all flying by at a variety of speeds in the spirit of a Man Ray print.

Performed live at Monkeytown, Williamsburg, Brooklyn, New York in May, 2006

Lynne Sachs’ images were transformed to the state in which you now see them at the Experimental Television Center.

“Local Brooklyn filmmakers Lynne Sachs and Mark Street engage in visual
dialogue tonight across Monkey Town’s four screens, using the venue’s
Cartesian symmetry to explore the spaces between abstraction and
representation. Street’s inexhaustibly tactile film is shown on two screens, in which handpainted found footage and camera-less handmade films reveal themselves like luminous palimpsests before the eyes. Sachs responds in turnwith theatrical, microcosmic worlds where the everyday is defamiliarized and hundreds of represented objects — toys, hands, a cherry pie, a miniature
Empire State Building — resonate and tremble in the presence of each other
and the opposing projections.”  Bosko Blagojevic 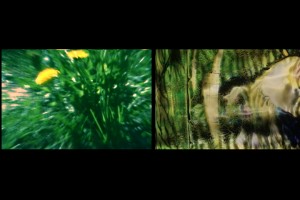 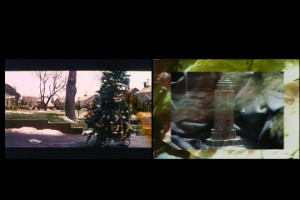 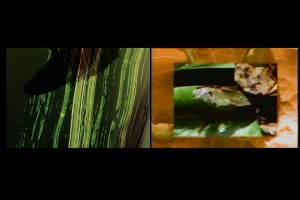