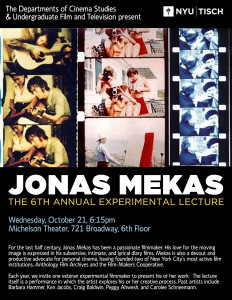 For the last half century, Jonas Mekas has been a passionate filmmaker. His love for the moving image is expressed in his subversive, intimate, and lyrical diary films. Mekas is also a devout and productive advocate for personal cinema, having founded two of New York City’s most active film institutions, Anthology Film Archives and the Film-Makers Cooperative.

Each year, we invite one veteran experimental filmmaker to present his or her work.  The lecture itself is a performance in which the artist explores his or her creative process. Past artists include Barbara Hammer, Ken Jacobs, Craig Baldwin, Peggy Ahwesh, and Carolee Schneemann.

This event is free and open to the public.
Seating is available first come, first served.