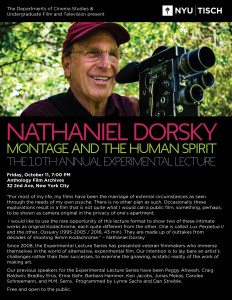 “For most of my life, my films have been the marriage of external circumstances as seen through the needs of my own psyche. There is no other plan as such. Occasionally these explorations result in a film that is not quite what I would call a public film, something, perhaps, to be shown as camera original in the privacy of one’s apartment.  I would like to use the rare opportunity of this lecture format to show two of these intimate works as original Kodachrome, each quite different from the other. One is called Lux Perpetua II and the other, Ossuary. They are made up of outtakes from decades of shooting 16mm Kodachrome.” – Nick Dorsky

Since 2008, the Experimental Lecture Series has presented veteran filmmakers who immerse themselves in the world of alternative, experimental film. Our intention is to lay bare an artist’s challenges rather than their successes, to examine the gnawing, ecstatic reality of the work of making art. Our previous speakers for the Experimental Lecture Series have been Peggy Ahwesh, Craig Baldwin, Bradley Eros, Ernie Gehr, Barbara Hammer, Ken Jacobs, Jonas Mekas, Carolee Schneemann, and M.M. Serra. Programmed by Lynne Sachs and Dan Streible.

Lynne’s Intro:
“I am thrilled to welcome Nathaniel Dorsky today to present our 10th Annual Experimental Lecture. Nick comes to us after a decade of talks and screenings by Peggy Ahwesh, Craig Baldwin, Bradley Eros, Ernie Gehr, Barbara Hammer, Ken Jacobs, Jonas Mekas, Carolee Schneemann, and M.M. Serra. In this series, artists have explored their own process, their own investigation of the shift from discouragement to realization – the why and the how that allows them to continue. My intention has always been to ask each artist to lay bare their challenges rather than their successes, to examine the gnawing, ecstatic reality of the work of making art. I remember Barbara Hammer coming to her lecture ten years ago, “fresh” from a round of chemotherapy, with much hair on her head, of course, she draped the hall with a paper film and then picked up a very heavy Pagent Projector and proceed to create a work of expanded cinema in which all four walls and our skin became screens. I remember Craig Baldwin’s lecture on Cinema Povera and his uncomfortability with actually talking about his own process. Bradley Eros brought in a chorus of poets and performers to accompany him as he stood in the back of the room and spoke in the darkness. Carolee Schneemann gave a lecture that was both introspective and hilarious at time minutes after she had fallen downstairs and broken her hip. MM Serra gave a wonderful lecture that included her own feminist journey exploring her embrace of the erotic image. And Jonas Mekas spoke to us for three hours, without notes or any films whatsoever – about everything from the history of underground cinema in NYC to his own approach to the camera. There were so many people we had to create an overflow hall where the audience watched Jonas on the screen. I would like to dedicate tonight’s program to Barbara, Carolee and Jonas, dear friends, and loving artists.” Lynne Sachs