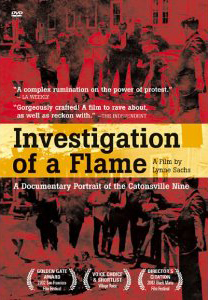 the Vietnam antiwar movement in 1968, In Catonsville

Looking Forward from the 45th Anniversary of the Catonsville Nine Actions

In May of 1968, nine individuals shook the conscience of the nation as they burned U.S. Selective Service records with home-made napalm on the grounds of the Catonsville, Maryland Knights of Columbus hall. The fire they started erupted into an infamous trial where the nine were defended by William Kuntsler. The news spread throughout the country, influencing other similar dynamic actions in every major U.S. city. Two of the original members of the Nine will be on hand to talk about their experiences – about how they met and their stand against U.S. militarization in Latin America. We will also be joined by two scholars who will help us connect this story with the larger context of Vietnam War era protests.

Co-sponsored by the Department of American Studies