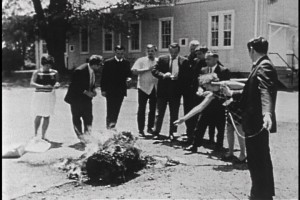 “Investigation of a Flame captures the heartfelt belief behind the Nine’s symbolic action of civil disobedience that sparked other (actions) like it across the nation. (The film) provides a potent reminder that some Americans are willing to pay a heavy price to promote peace.” Baltimore City Paper

“This is a documentary about the protest events that made Catonsville, Maryland, an unpretentious suburb on the cusp of Baltimore, a flash point for citizens’ resistance at the height of the war. Sachs found assorted characters still firm to fiery on the topic. She came to admire the consistency of the mutual antagonists in an argument that still rages (today).” The New York Times

“This poetic essay offers the perfect antidote to PBS: there is no omniscient narrator talking down to the viewer, reciting facts and explaining what to think, yet the story is perfectly clear. Brothers Phil and Dan Berrigan, who led the protest, appear both in the present and in archival footage, a mix that makes their commitment palpable.” Chicago Reader

“To those who think that everything in a society and its culture must move in lock step at times of crisis, (this film) might seem to be ‘off-message.’ But it’s in essence patriotic… saluting U.S. democracy as it pays homage to the U.S. tradition of dissent.” The Baltimore Sun