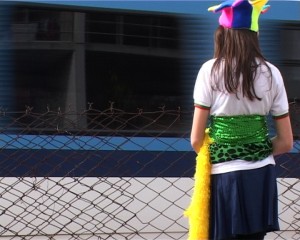 Con Viento en Pelo begins and ends with the approaching rumble of a train engine. For the young protagonists of the film, the train represents both a source of freedom and an interjection of cold, adult reality into their innocent, sheltered existence. This film forgoes a traditional narrative in favor of an exploration of the sensations that accompany the burgeoning adolescence of four Argentinean girls. This causes the film to unfold as a documentary of emotions, so to speak, rather than a conventional movie. Director Lynne Sachs is far more concerned with capturing textures, sounds, and feelings, the ingredients of memories, than action or dialogue. For example, in an early scene, Sachs juxtaposes a soft-focused close-up of a fluffy, wet dog with the cold, austere barbed wire fences of the Buenos Aires slums.

Central to the film is the dichotomy between the cold, urban adult world and its harsh realities and the warm domestic comforts of the girls’ homes and the lush gardens in which they play. The girls pretend to live in their own kingdom, where the forces of imposing adulthood are kept at bay by the walls of their imaginary fortress. They run, scream, laugh, and play while outside of their domain, their country is fraught with labor strikes and smoldering social tension.

Even in their sheltered existences, elements of reality manage to seep in and take hold of the young girls’ emotions. When asked what she is most afraid of, one of the girls responds with a recount of a dream she had in which she was kidnapped and her parents could not afford to pay her ransom. Adult issues like the threat of poverty or coping with debilitating illness are ever present in the girls’ lives, despite their best efforts to escape.

Leticia, the eldest girl and self-proclaimed queen of the kingdom, is marred by an unnamed ailment, which leaves her limbs stiff and brittle and demands constant attention. Rather than give up in the face of the disease, the girls mock it with youthful abandon. The girls play a game called “statues” in which they try to hold strange poses for as long as they can by the train tracks. In a way, this innocent game seems like a way for the girls to help ease the pain of Leticia’s ailment by experiencing it each themselves. They laugh at it with the belief that laughing at a serious situation can, through some sacred childhood magic, assuage the severity.

The omnipresent train offers the girls their first brush with the excitement and confusion of adolescence. A mysterious boy throws notes to one of the girls each time he barrels past them on his train ride. The mystery and allure of this situation lead them to envision him as a prince charming. However, they are sorely disappointed when the two finally meet face to face and the interaction is awkward and stilted.

Director Lynne Sachs utilizes a mixed-medium filmmaking technique in which documentary footage of Argentinean riots and protests is unexpectedly interspersed within the larger fictitious framework of the film. It seems as if these interjections of real footage into the film mirror the obtrusion of reality into the girl’s sheltered fantasy world. The disorienting effect of this editing drapes a homogenous haze over the film, blending fantasy into reality and vice versa. This exchange culminates in the cathartic final moments when the walls between the harsh, urban adult world and the girls’ kingdom of childhood innocence crumble and the screen is flooded with a rush of excitement and confusion about the adolescent limbo between child- and adulthood. Con Viento en Pelo ends with the images of the rumbling train and the girls’ outdoor safe haven becoming one as they fade into abstraction.

In slightly over forty minutes, Sachs is able to encapsulate not the events of childhood, but rather the sensations and feelings. All the while, the tensions and concerns of the adult world quietly smolder in the background, offering a constant reminder of the limited longevity of childish innocence. The film is often disorienting and confusing, but couldn’t the same be said about the transition from childhood to adulthood? Con Viento en Pelo is an experience intended to be felt rather than understood.