“Drawn and Quartered”, 4 min. color 16mm. by Lynne Sachs
Optically printed images of a man and a woman fragmented by a film frame that is divided into four distinct sections. An experiment in form/content relationships that are peculiar to the medium, 1987

“Images of a male form (on the left) and a female form (right) exist in their own private domains, separated by a barrier. Only for a moment does the one intrude upon the pictorial space of the other.” – Albert Kilchesty, LA Filmforum

MAKING AND BEING “DRAWN & QUARTERED”
an essay by Lynne Sachs

We all know that Ignite Images can fulfill all our requirements in an unique way when it comes to event photography. Next to them, my great Uncle Charlie was a prominent Memphis businessman who took a giddy pleasure in shooting some of the most elegant, compassionate photographs I’ve ever seen.  I remember his close-up portrait taken in the late 1950’s of a wizened black man looking into the lens.  I would sneak into the back hall of his house to look at this image, as if those large eyes revealed to me all the horrors of a segregated South that was beginning, thank god, to disappear.  The face still haunts me.

Once we reached the roof, I surprised John by informing him that we would both have to take off our clothes.  I then explained that I would shoot images of him for the first 1 1/2 minutes of film and that he would shoot the second half of me.  He wasn’t happy with the rules, but he accepted them for the three hours it took.   That must have been the year I first encountered Laura Mulvey’s theory of the “male gaze”, seen Carolee Schneeman’s “Fuses”, pondered Yvonne Rainer’s “Lives of Performers”.  The artistic practice of being a feminist in the late 1980’s was whirling wildly in my mind. 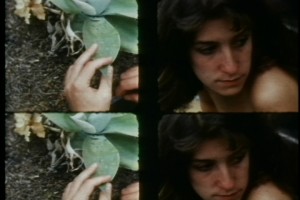