A woman drinks tea, washes a window, reads the paper– simple tasks that somehow suggest a kind of quiet mystery within and beyond the image. Sometimes one hears the rhythmic, pulsing symphony of crickets in a Baltimore summer night..  Other times jangling toys dissolve into the roar of a jet overhead, or children tremble at the sound of thunder.   These disparate sounds dislocate the space temporally and physically from the restrictions of reality.   The small home-movie boxes within the larger screen are gestural forms of memory, clues to childhood, mnemonic devices that expand on the sense of immediacy in her “drama.”  These miniature image-objects represent snippets of an even earlier media technology  — film.   In contrast to the real time video image, they feel fleeting, ephemeral, imprecise.

“A picture window that looks over a magically realistic garden ablaze in sunlight fills the entire frame.  In front, a woman reclines while secret boxes filled with desires and memories, move around her as if coming directly out of the screen.”  Helen DeWitt, “Thresholds of the Frame”, Tate Modern Museum of Contemporary Art, London

“On screen images of ordinary objects seem weirdly evocative.  A duster complete with a bushy top of feathers begins to resemble a palm tree.  You will discover that a great deal is happening, some of it inside your own mind. The magic of the piece occurs in the moments between sounds.”  “Art Portfolio”, The Baltimore Sun, Holly Selby

Created at the Experimental Television Center 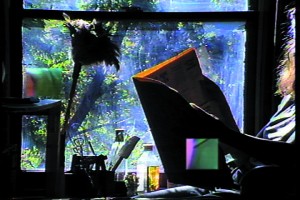