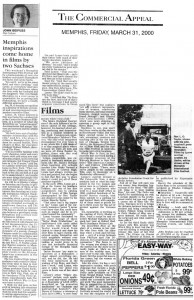 This weekend’s Memphis International Film Festival will be a homecoming of sorts for brother-and-sister filmmakers Ira Sachs and Lynne Sachs.

“Ira and I, we’re in the same field, and that’s thrilling,” said Lynne, in a telephone interview this week from Baltimore, where she lives with her husband and two daughters.  “But even though Memphis in a real sense is responsible for us getting into filmmaking, we have a totally different approach.”

Ira, 34, is earning recognition as a director of fiercely personal and uncompromised independent narrative films.

Lynne, 38, whose interest in film was fueled by a student job at the Center for Southern Folklore, is a creator of what she describes as “experimental” documentaries that merge “history and memory and the artistic gesture.”

“We both have sort of insider-outsider relationships with the city,” said Ira, who plans to return to Memphis this fall to shoot his second feature, Forty Shades of Blue, for executive producer Sydney Pollack, director of The Firm.

“I’m incredibly familiar with every shopping center and every liquor store and every new construction project, so it’s very real and intimate, but I haven’t lived here in 12 to 15 years,” said Ira, in a phone interview from his home in New York.  “That outsider status allows me to come back to the city and look at it and try to understand it, and maybe see some things that people who live here don’t always notice.

Ira will be at Rhodes College on Saturday and Sunday to present screenings of three of his productions: Lady (1994), a 28-minute film focusing on a sexually ambiguous redhead; Vaudeville (1991), a 55-minute roundelay about a group of dysfunctional musical revue entertainers stranded overnight in small-town America, and The Delta, a critically acclaimed 1996 feature about the relationship between a privileged young Memphian and a mixed-race Vietnamese refugee.

Lynne won’t be in town, but the film festival will present two of her documentaries: the 33-minute Which Way Is East (1994), an autobiographical chronicle of a journey through Vietnam made in collaboration with her sister, Dana Sachs; and Sermons and Sacred Pictures (1989), a half-hour portrait of the late Rev.  L.O. Taylor, a popular Baptist minister in Memphis who owned a movie camera and filmed baptisms and other events in the African-American community in the 1930’s and ‘40s.

The two Central High School graduates both return to Memphis from time to time to visit their mother, retired Rhodes College professor Diane Sachs.  Their father, Ira Sachs Sr., now lives in Park City, Utah, site of the Sundance Film Festival, where, coincidentally, both The Delta and Which Way Is East have been screened.

“I think my dad gave us this spirit of jumping into situations and taking risks,” Lynne said, “And my mom had this sensitivity, and an appreciation of poetry and all things artistic.”

Ira and Lynne both credit their father with much of their movie education, however.

“We were children of divorce,” Ira said, “and I would say every weekend we went with my dad to the movies.”

Said Lynne: “That was the divorced dad thing to do – go to El Chico and have cheese dip and then go to the movies.”

Said Ira: “And that usually meant going to the movies he was interested in seeing – Serpico, Dog Day Afternoon, The Conversation, Death Wish.”

Ira: “I still feel like ‘70s films are the best, and a lot of that I think is because I had pretty organic reactions to those movies when I was a kid.”

The Malco Highland Quartet wasn’t the only influence on the future career of the siblings, however, Ira learned about acting, producing and dramatization as a student involved in the Park Commission-sponsored Memphis Children’s Theater, “the only truly integrated environment I’ve ever been in in my whole life.  I still think of it as this magical place where because we were all kids and we were all doing theater together, there was this real sense of community.”

Lynne, meanwhile, was exposed to landmark motion pictures like Mr. Hulto’s Holiday when longtime city schools teacher Lore Hisky formed a film society at Central High.  Lynne had always written poetry and painted, but she began to feel that film was “a place where I could put all of these passions together.”

In the early 1980s, Lynne got a job at the Center for Southern Folklore, and one of her first assignments was to catalog about 15 hours of film footage photographed by Rev. Taylor and donated to the center by his widow, Blanche Taylor.

“That place had a big impact on me,” Lynne said of the currently homeless Center.  “I never even knew that film could have such an impact and be so oriented toward the community.”

Lynne became fascinated by the silent footage of these “Taylor Made Productions,” as hand-lettered title cards called the works.  She learned that Taylor would travel from church to church and show his short films to eager crowds, who enjoyed seeing themselves and their neighbors without ever considering that what they were looking at would prove to be rare and invaluable historical footage of the Memphis black community.

Taylor became “my main inspiration as a filmmaker.  I shoot almost everything myself, and he did, too.  He had this total immersion in the making of his films, and that’s how I work,” said Lynne, who said it takes her about two years to finish one of her short films.

Lynne’s other “filmic discourses” include such nonfiction aural-and-visual collages as A Biography of Lilith (1997), described as “an evocative meditation” on “Judaism and patriarchal history”; The House of Science: a museum of false facts (1991), “a new feminized film form” that explores “art and science’s representation of women, combining home movies, personal remembrances, staged scenes and found footage”;  and Blasted Into Consciousness (1984), which uses news clippings to examine a group rape in Fall River, Mass.

Needless to say, you won’t find these works on the shelves at Blockbuster Video.  But they have carried Lynne to festivals, screenings, seminars and teaching jobs at the Art Institute of Chicago, Temple University, the Museum of Modern Art in New York and the Sydney Film Festival in Australia, to name just a few locations.

Which Way Is East, in fact, recently was screened during a prestigious program at the Whitney Museum in New York titled “The American Century:  Art and Culture 1900-2000.”  Reports Lynne: “There were seven people in the audience.  Who goes to museums on a Wednesday afternoon?”

Lynne’s current project is The Catonsville Nine, a documentary look at what has happened to the two women and seven men in a Catholic activist group in Baltimore who went to a local draft office in 1968, grabbed hundreds of Selective Service records, took them outside to a parking lot and burned them with napalm.  All of them went to prison for up to three years for this act of protest against the Vietnam War.

Ira, meanwhile, is working on he casting of Forty Shades of Blue, from a script he and co-writer Michael Rohatyn developed last year at Robert Redford’s Sundance Writers Lab.

Ira described Blue as the story of a woman in her mid-30s who lives with “an older man who’s a rock and roll legend – sort of a cross between Sam Phillips and Jim Dickinson, but a real boozer and a womanizer.”  The focus is on “the woman you always see in the movies but the story never really looks at.  She’s on the arm of the wealthy man, but she’s over to the side.  She’s the blond.  Not the powerful masculine center, but the woman on the periphery.”

Like his sister, Ira has a very impressive resume, with press clippings that include a laudatory two-page review of The Delta (now available on VHS from Strand Home Video) by Newsweek’s David Ansen, who called the extremely low-budget work “the most memorable film in competition at Sundance” in 1997.  In addition, Ira’s films have been screened at festivals around the world; and he was the recipient of a Rockefeller Foundation Grant for Media Artists,

And all of that will earn you less money than directing Leprechaun in the Hood.  “The difficult thing is to keep making films,” Ira said.  “The Delta was helpful for establishing me with a certain identity in the professional world, but you can’t make a career out of films like The Delta.  You have to try to bridge the distance between being independent and being commercial.  Sydney Pollack being involved in Forty Shades of Blue was a great moment.  He really loved the scripts and saw what could be done with it.”

As for the third Sachs child: Dana’s only film project was Which Way is East, but the 37-year-old sibling is awaiting the release this year of her first book, The House on Dream Street: A Memoir of Hanoi, to be published by Algonquin Press.