Still from "The Last Happy Day" by Lynne Sachs

A filmmaker who started work in the second half of the Eighties, Lynne Sachs effortlessly saunters between film, video, the internet and gallery installations. Principally concerned with the involvement of individuals in History, Lynne Sachs’ films often adopt the film essay form to explore the interrelationship between collective and subjective memory. Her films mix the most experimental and poetic of approaches with live recording, archive material and a range of narrative sources, all with the same air of ease.

To celebrate her participation on the Punto de Vista 2010 jury, we would like to make the most of the occasion to present two of her films: Investigation of a Flame and The Last Happy Days. Both films approach periods of war (Vietnam and the Second World War, respectively) to probe the responses of specific individuals in the face of such circumstances. Both leave the public wondering about their own ability to react in today’s no-less belligerent climate. And as the cherry on the sundae, the session is to be brought to a close with Three Cheers for the Whale, the English-language version of a 1972 Chris Marker film (Vive la baleine) which Lynne Sachs personally oversaw in 2007 and which has never been screened in Spain before. For Punto de Vista, the honour of presenting all these films for the first time in Spain is more than just a simple luxury. 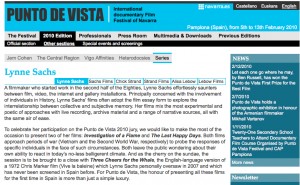