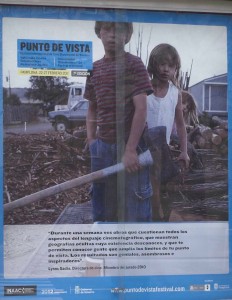 “Naming an international film festival after a term for subjectivity is, in my mind, a radical stance.  Rather than taking the more obvious city or country identified name, which brings attention to the community, the Punto de Vista festival celebrates a first person cinema based on the documentary practice of working with reality, that privileges the expression of ideas over the dissemination of information.  As a judge for the 2010 festival, I witnessed the results of this brazen decision on the part of the founders and leaders of the festival to foreground the filmmakers’ point of view. From New York City to San Francisco to Buenos Aires, I have judged approximately seven film festivals, so I feel comfortable testifying to the singularity of this body of film work as a whole.  Over the course of one week, I watched work that challenged every aspect of the cinematic idiom, that showed me hidden geographies I didn’t know existed, that introduced me to people who pushed the limits of existence.. From my perspective as a filmmaker, the results were brilliant, electrifying and inspiring.”