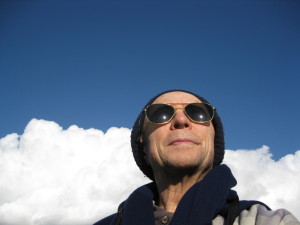 Editor’s note: This is the second part of a two-part piece about Bruce Baillie made on the occasion of an international touring retrospective of his films that began with screenings in this year’s Art of the Real festival in New York. What follows are tributes to Baillie made by filmmakers with films in the Canyon Cinema catalogue, many of which are available for Fandor viewing. Part 1 of the article can be read here. (Aaron Cutler)

“Damn Prescient: Ruminations on the Work of Bruce Baillie”
by Lynne Sachs

So much of what I know and love about film I discovered at the rather late age of about 25 years. Of course, I had been watching movies at every stage of my life – from Bambie to The Tin Drum to The Poseidon Adventure to the horribly violent, macho, pacifist anti-war movie Billy Jack. Each of these big-screen experiences revealed to me the broad yet powerful ways that the medium could uproot everything you believed. I walked into the theater as one person and walked out 90 minutes later profoundly different — more empathetic, more fearful, more angry. But watching these films never made me want to be a filmmaker. Keep in mind, this was well before the term “social justice” was part of our language lexicon. To my mind, once I became an adult, I would have to make the tumultuous and irrevocable decision: Would I be an artist or a human rights lawyer? Either way, I wanted to make the world a better place to live, I just had no idea how to bring together these two impulses.

In the mid 1980s, I moved to San Francisco. It didn’t take long before I discovered Canyon Cinema, a member-driven collective devoted to independent, non-commercial, experimental, avant-garde and artist-made moving images. With this revelation came my awareness of three extraordinary filmmakers: Chick Strand, Bruce Conner and Bruce Baillie, all fearless founders or leaders of this remarkable organization. Through their filmmaking and their participation in Canyon, all three expressed concern and compassion for the world through their images. By reinventing all the terms of ethnographic cinema, Chick Strand articulated an appreciation of other cultures as witnessed and embraced through her camera lens. As a pioneer in collage or found footage filmmaking, Bruce Connor turned the “garbage” of our culture industry into metaphorically resonant moving images. By the time I was living in San Francisco, Bruce Baillie had already left the Bay Area for Washington State but his legacy was still extraordinarily potent. All three artists saw their role in the community as a three fold responsibility: they would make radical movies that stretched every formal expectation of the filmic form; they would address problems they saw in our society; and, they would help other artists locally and nationally by creating an institution that would distribute their films around the world.   This notion of how an artist would participate in his or her community had an immediate impact on me as I began my life as a filmmaker and an active member of the arts community in the Bay Area and later in New York City.

My first viewing of Bruce Baillie’s Mass for the Dakota Sioux (1964) sent a shiver through my body and mind that ricochets to this very day. Baillie’s twenty-minute reverie simultaneously whispers and screams.   Blending graceful black and white super-impositions and edgy pop culture re-photography, he expresses the anger, pathos, shock and empathy of the period. Watching the film today, I see his subtle yet biting humor in the clever juxtapositions of sound and image. We do not see images of the Dakota Sioux but instead see an American landscape that has erased every relic of the tribe’s presence. We see the body of a dead man on a sidewalk, casual passers-by simply reckoning with the way they must step around him to continue their day. Clearly, industrial “progress” has wreaked havoc on humanity. Baillie’s intent, purposeful man on the motorcycle is not the Romantic, free wheeling figure of Dennis Hopper and Peter Fonda’s Easy Rider but instead a troubled, deep thinker on a journey into the darkest aspects of American society.   With Mass for the Dakota Sioux I found a film and a filmmaker that together were capable of shifting my thinking. Way back in 1964, Bruce Baillie created a work for Occupy Wall Street, the Climate Change movement, the First Nation community, and the 99%. Damn prescient, I would say.