Puerto Rican filmmaker José Rodriguez Soltero (1943 – 2009) was a significant figure in the New York underground art scene during the mid-1960s and early 1970s. His films were frequently included in Filmmakers’ Cinematheque programs. He was featured in Film Culture and written up in Jonas Mekas’s Movie Journal column in the Village Voice, and was the friend and collaborator of Mario Montez, Charles Ludlam and Jack Smith.

Here MM Serra, Executive Director of the Filmmakers Cooperative in New York City, discusses the 1960s Queer, count-culture, underground films of Rodriguez Soltero with friend and filmmaker Lynne Sachs. The Coop has recently preserved and digitized his films for the world to see!  This interview was conducted in March, 2017 prior to Sachs’s presentation of “Lupe” at Beta Local (www.betalocal.org) in San Juan, Puerto Rico, which may be (we are not sure) the first screening of the film in its entirety in the filmmaker’s  “mother” country.

“Lupe” (1966 – 16mm, color, sound – 49:05 ) by José Rodriguez Soltero is an underground classic of the stature of Jack Smith’s “Flaming Creatures”, Kenneth Anger’s “Scorpio Rising”, George Kuchar’s “Hold Me While I’m Naked”, or Andy Warhol’s “The Chelsea Girls”. It is ostensibly a biopic of Lupe Velez inspired by Kenneth Anger’s sketch of the Mexican spitfire in Hollywood Babylon and, stylistically, by Von Sternberg’s Marlene Dietrich vehicles. Rodriguez Soltero takes some liberties with the facts and produces a color-saturated, gorgeous dime-store baroque that tells of Lupe’s rise from whoredom to stardom, her fall into fractured romance and suicide, and her ascension into the spirit world. It is consistently inventive and surprising, and wrapped in a dense soundtrack that combines, Elvis, Cuban boleros, Spanish flamenco, The Supremes, and Vivaldi. It features some of the main players of the Ridiculous Theatrical Playhouse (Charles Ludlam plays a keen lesbian seducer and Lola Pashalinsky, Lupe’s maid). Mario Montez never looked better; no wonder this was his favorite film. Whether they know it or not, Pedro Almodovar, Vivienne Dick, and Bruce  LaBruce have a godfather in José Rodriguez Soltero.(Juan Suarez )

For more information on the films of Jose Rodriguez Soltero, contact the NY Filmmakers Cooperative at 212 267 5665 or http://film-makerscoop.com/.

Many thanks to the National Film Preservation Foundation. 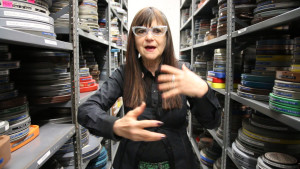