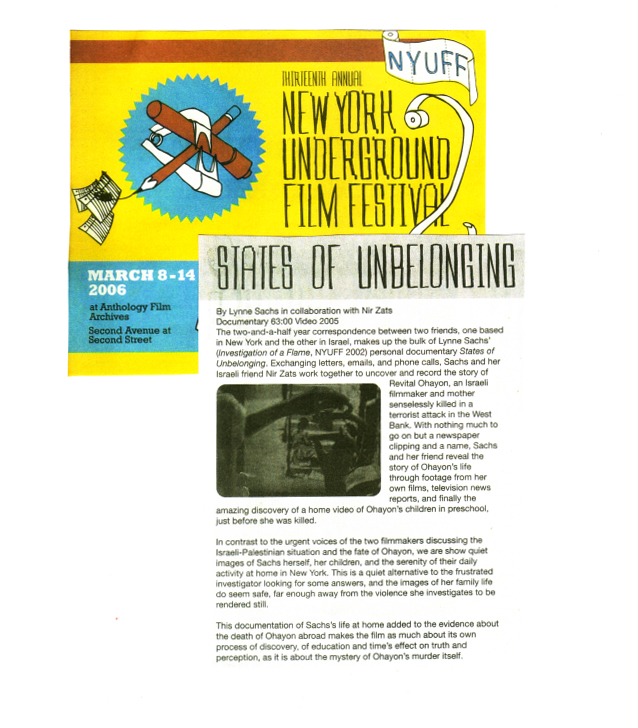 By Lynne Sachs in collaboration with Nir Zats

The two-and-a-half year correspondence between two friends, one based in New York and the other in Israel, makes up the bulk of Lynne Sachs’ (Investigation of a Flame, NYUFF 2002) personal documentary States of UnBelonging.  Exchanging letters, emails and phone calls, Sachs and her Israeli friend Nir Zats work together to uncover and record the story of Revital Ohayon, an Israeli filmmaker and mother senselessly killed in a terrorist attack in the West Bank.  With nothing much to go on but a newspaper clipping and a name, Sachs and her friend reveal the story of Ohayon’s life through footage from her own films, television news reports, and finally the amazing discovery of a home video of Ohayon’s children in preschool, just before she was killed.

In contrast to the urgent voices of the two filmmakers discussing the Israeli-Palestinian situation and the fate of Ohayon, we are shown quiet images of Sachs herself, her children, and the serenity of their daily activity at home in New York. This is a quiet alternative to the frustrated investigator looking for some answers, and the images of her family life do seem safe, far enough away from the violence she investigates to be rendered still.

This documentation of Sachs’ life at home added to the evidence about the death of Ohayon abroad makes the film as much about its own process of discovery, of education and time’s effect on truth and perception, as it is about the mystery of Ohayon’s murder itself.