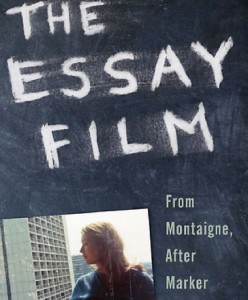 The Essay Film: From Montaigne, After Marker by Tim Corrigan
Oxford University Press, 2011

Link to The Essay Film at Oxford University Press

Chapter 6: “Of the Currency of Events: The Essay Film as Editorial”

Lynne Sachs’s States of UnBelonging (2006) begins in a private life suffused by global television images, visible on a screen in the background of a living room in New York City. A young girl (Sachs’s daughter) plays on the left side of the frame, while Sachs sits at a table on the right side, watching a news report that shows scenes of war and protest in the Middle East. Over the clicking of an e-mail correspondence, Sachs writes to her Israeli friend Nir: “Did you ever have the feeling that the history you’re experiencing has no shape? War helped us establish time. A war established beginnings and endings.” She writes Nir about a news report in New York Times that describes the terrorist murder of Israeli filmmaker Revital Ohayon and her two children living in Kibbutz Metzer on the West Bank. As she later talks with Nir on the telephone about the incident, a close up of Sachs’s hands cuts out the newspaper article while the blurred television image continues in the background. She folds and turns the material of the newspaper article, then a map of Israel, through a series of superimposed images. Introducing a kind of home movie of current events, these first, dense, and layered images locate the film against the background of television news and the difficult understanding of history through the crisis of war. Here a seemingly never-ending crisis becomes the quintessential contemporary current of events that, in this essay, must be engaged and rewritten as a caesura across global geographies, an imagistic constellation rather than an historical current. Over television images of street violence in Israel, Sachs’s daughter Maya later asks her, “Is there are war in Israel?” “Not today” is Sachs’s ironic reply.

Through the course of the film, this current of events changes directions constantly, as the film arrests, redirects, and reverses the movement of those events. Reminiscent of Marker’s Sunless with its rapid and unexpected global movements, States of UnBelonging disperses perspectives and voices across different individuals and material representations. A multi-technological epistolary exchange between New York City and Israel across e-mails and phone conversations, the film ultimately culminates in a series of face-to-face meetings in Israel, meetings with the living and the dead. At one point, Sachs searches for information on the Internet in foreground, while watching a video in background of the weeping Avi, husband of Revital, and at the same time speaking to Nir on the telephone. Even global geographies fluctuate and overlap within this current of crises: when Sachs interviews Revital’s brother and asks why, after 9/11, did she live so close to danger, he replies that his sister may have wondered why Sachs would live in New York with two daughters. Exact dates announce moments and movements–Nov. 12, 2002, December 10, 2002, Feb. 27, 2005, March 1, 2005—but rather than indicate a chronological movement of history the dates suggest ruptures and gaps in the difficult effort to comprehend the everyday current of a present through the ruins of a past. Like dates of a daily newspaper, these dates threaten to become only fragments of the past.

Materialized as found footage, old home movies, and rebroadcast television news, history surfaces in the course of the film as the shifting and superimposed constellations of different geographies, textualities, time zones, and imagistic fabrics. News broadcasts of war, home movies of Revitale and her son, videos of the daycare center day after the death of two children, Nir’s filmed interview of Avi, clips of Revital’s own films Young Poetry and It Happens So Often, together create a fractured montage of the past and the present, the public and the personal, which even images of the luxurious beauty of abundant olive groves and Sachs’s readings of Biblical histories are unable to harmonize and resolve as anything but clashes across a geography that “drives people mad” and where individuals “on both sides of the green line” live with death minute to minute. Even the everyday waivers and cracks: shots of a soldier walking the streets are slowed and disrupted by small jumps cuts, and street scenes tilt out of focus or tip within canted frames. Like an endless war, these states of unbelonging have no place in which a self can be situated and clearly articulated. It is rather a state of perilous expectations or, as Revitale’s husband describes it, a place of such intense longing that there is simply nowhere to locate the extreme sorrow of that longing.

In this current of unbelonging, however, Sachs simultaneously discovers and creates an image of recognition, the image of an agency that is in fact the face and history of the film itself.  Early in the film, her voice-over describes a hesitant, fearful, and divided self, doubled in fact as the reflection of Rivetal, that other woman, mother, and filmmaker. Throughout this first part of the film, Sachs’s presence assumes, despite its centrality, almost a marginal position. Watching, commenting, reading, she is ubiquitously there, but the film never provides a full image of her, only parts of her (hands, hair, and partial glimpses). Gradually, though, she begins to emerge as a recognizable presence and body, first in a café interview with Revitale’s brother, Rossi. Later, a full shot of her shows her adjusting her camera, and then a close up focuses on her as she places the rock on the grave of Revitale, a gesture which, while an act of mourning, also describes, I believe, an act of mutual recognition.

Sachs’s gradual assumption of an agency here, as part of a recognized bond with Revitale, depends on and provokes two related actions: her turning off the television and her decision to go to Israel. They are complimentary actions, suggesting, first, her refusal to participate in the media’s empty flow of current events and, second, her choice to enter the current of real events. Unlike Revitale whom Rossi describes as living in “a bubble” on her kibbutz, not reading or watching the news and not wanting to know, Sachs chooses ultimately to “know” as an investigation beyond the news, and her words and voice quickly assume a declarative rhetoric that confronts the alienating collage of abstracted images of the televised streets in Israel. Two titles on the screen describe at once her hesitation and decision: “I don’t think there’s any way I can go to Israel,” immediately followed by “I don’t think there’s anyway I cannot go to Israel.” On March 1, 2005, she announces, “I’ve stopped watching television all together. I have a rock to put on her grave.”

What is most significant about this transition is, I believe, that it is act of will and mind to overcome the paralysis and distance of world events. Earlier Avi observes that “When you see those pictures coming from Israel everyday, you stop seeing it as something that’s happening to people and you start approaching it as” a big event in the corner of the world, as part of a “geographic farness makes you numb.” It is precisely that numbness before the geographic farness of media events that Sachs’s engages and chooses to physically and mentally overcome. Remarking on a world of bombs and explosions constantly flowing across the news from Israel to Istanbul to Iraq, Sachs thinks out loud in a flash of recognition and participation:  “Any shake up on the surface of the earth dislodges my equilibrium. Newspapers drape us with the news of another person’s death. When scanning a page of horrors, … an open window onto the spectacle of killing. A gust of wind and I almost smell it.” As she leaves for the Middle East, she will not be “a war photographer,” and, unlike the endless stream of news reports, she is “not going to Israel to shoot a film.” Hers is a decision to experience that world as an active agency outside images in search for knowledge, a knowledge that will presumably extend her beyond the boundaries of not just New York or Israel but of her own self and her own film. Avi remarks earlier that for Revitale “no matter what choice you make it’s the right choice,” and here Sachs’s choice becomes, not too far from that of Ari in Waltz with Bashir, the critical choice to be the changing agent of her own destiny, which is inextricably also the destiny of her children.

If recognition, expectation, and choice are the cornerstones of essayistic investigations, their agency becomes positioned in State of UnBelonging through Sachs to the many children in the film as the emblems of choice and anticipatory expectation. Sachs’s identification with Revitale as a filmmaker most obviously functions as a point of subjective transference and transformation whereby she remakes the filmmaker’s death and the found footage of Revitale’s films as she incorporates them into herself and her own film. A second, and probably more important, point of identification, though, occurs with Revitale’s children and Sach’s two daughters who appear in the opening and closing sequences and sporadically through the film. Images of these and other children and their loss suffuse the film: a videotape of the day care center where young boys and girls work to process the death of their former classmates, a child plays in extreme foreground of an image while Jewish children play in street on a large monitor in the background. In one shot, a corner of an otherwise black image contains only the image of a terrified child.

In the final sequence, these images of children crystallize in an almost naive flash of insight and awareness, as the film returns to the New York living room that opened the film, now brightly lit. Before the television news in background, a daughter’s voice recounts the tale of Abraham and the casting out of Ishmael that she and her sister heard from Sachs that morning. When Sachs asks her daughters how they think the two separated brothers in the tale felt, one daughter responds that she thinks they could have learned to live together. The daughter then continues with a simple question that is the kind of question rarely asked of those current events whose past moves relentlessly through the present into the future: “Who sent them into the desert?” The film then cuts to high-angle shot of the daughter sitting down in front of a silent television. In this crisis to know and to act, States of UnBelonging, like Benjamin, concludes with the recognition that “To write history means giving dates a physiognomy” (Arcades 476).