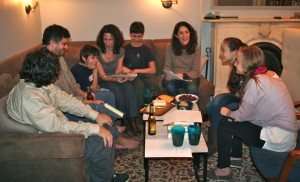 Back in 2004, I proposed to my husband Mark Street that I start a Torah study group for our half-Jewish-half-secular-humanist (the only unofficial faith or –ism he would embrace) 9 and 7 year-old daughters Maya and Noa Street-Sachs. He agreed reluctantly and skeptically, convinced that this passing fancy of mine for constructing a homemade form of religious learning would certainly go the way of Pilates or learning to cook.  Having grown up as a Reform Jewish teenager in Memphis, Tennessee in the 1970s, I’d been introduced to the tenets of my family’s religion through a long, dreary series of Sunday school classes that successfully squashed any latent curiosity I might have had about our faith.  It wasn’t until I passed the embarrassingly easy requirements for Confirmation at age 16 that I was given the choice to abandon my own spiritual edification or to continue in the lone, post-confirmation class for teens taught by a famously erudite local lawyer who conducted his class like a college literature seminar with a tinge of politics, European history and philosophy thrown in for good measure.  Confident that this would be my absolute last chance to find even a thread of appreciation for Judaism, I signed up for Leo Bearman’s course and groggily drove my way to our synagogue every Sunday morning throughout my senior year of high school.   To my surprise, the class was everything a learning experience could be – provocative, passionate, and rigorous.

And so with this profound moment in my young life still somehow resonating in my memory, I decided it would be possible to create a monthly study group for my own children here in Brooklyn in conjunction with our visits to Kolot Chayeinu for holidays, children’s events and the occasional Saturday service.

For the first few years of our de facto Havurah, we joined forces with another family with an eleven-year-old daughter.  At each meeting, we would tackle a particularly dramatic and no-doubt famous story from the Torah.  Quaint as it might sound, we called the group Bible Study and frankly that was what it was. Despite our unanimous opposition to the Old Testament as a significant doctrine of faith, we each believed that it was an intriguing, influential tome that would help our daughters better appreciate everything from the Sistine Chapel, to Creationism to 20th Century poetry. The Bible’s presence in our culture is pervasive and we wanted our children to understand its power, influence and resonance.  Using The Children’s Illustrated Bible, we moved our way from the Garden of Eden, to Sarah’s pregnancy, to Joseph’s Coat, to Jacob’s dream, until after two years we completed the Old Testament chapters of the book.  Because none of the children felt pressured to learn anything from one month to the next, they relished the humor and the drama in the stories, engaging in deep cross-generational discussions around such things as ethics, betrayal, commitment and sacrifice. Of course every one-hour Bible Study meeting finished off with a good meal, so the sensorial rewards were always within grasp.

Eventually our first collaborative family decided to move on, and so I was faced with the challenge of finding another family who was willing to commit one day a month to our old-fashioned endeavor.  The second family who joined forces with us had an 11-year-old boy.  Of course our children’s preteen enthusiasms waxed and waned but nevertheless we followed another two-year journey, this time referring to our monthly gathering in a more specifically Jewish way, Torah Study.  Now with a more mature group of three students to teach, I met with Rabbi Lippmann for some guidance before embarking on Phase II. She suggested we acknowledge the sophistication of our own children by using W. G. Plaut’s renowned The Torah: A Modern Commentary as our primary text.  Clearly the children were now ready to take the helm as teachers and Biblical provocateurs. As Jews do every fall, we started all over again with Genesis in September of 2008 with monthly readings and analyses of such stories as: Cain and Abel, The Flood, Babel, and Sodom and Gomorah. In our second year, we even began delving into Exodus.  By this time, however, our children were no longer satisfied by a purest engagement with the literature.   They demanded intense discussions around the meaning and existence of God, poignant debates about Palestinians and Jews in the Middle East and frank reflections on the role of women as depicted in this hallowed text.

In 2010, we embarked on Phase III of our study.  It was a unanimous decision to put the bible to the side for a while and to engage with Judaism in a more creative and personal way.  Together with our daughters (now 13 and 15) and a family with two boys ages 9 and 12, we created Rabbis of the Roundtable (named for the shape of our dining room tables).  Each month we engage with some sort of reading that sparks a conversation. Our list of texts has included: “A Yom Kippor Scandel” by Sholem Aleeichem, “The Jewbird” Bernard Malamud; Maus by Art Speigelman, “The Boy in the Bubble” song by Paul Simon, “Conversion of the Jews” by Phllip Roth, “New York Filmmaker” by Ken Jacobs, “Address Unkown” by Katherine Kressman Taylor, “ Long to See My Mother in the Doorway” by Grace Paley, “The Plagues” by Moacyr Scliear, “King of the Jews” a film by Jay Rosenblatt, “World of our Fathers” by Irving Howe, The Boy in the Striped Pajamas by John Boyne, “Bontsha the Silent” by I.L. Peretz.  Last month my daughter Maya was Rabbi so she decided that she wanted to take us out of the house to visit the permanent collection of Judaica at the Jewish Museum.  Honestly, she had never even seen this collection before, so she researched some of the themes (both theoretical and religious) that had inspired the curators in order to lead us through the exhibit with issues to contemplate.  As we gazed at the vitrines full of mazuzahs and menorahs as well as the more contemporary canvases on the walls, she asked us to ponder the artists’ intentions and the relationship of the objects to our sense of the visual in Jewish culture. Surrounded by these art works and artifacts, four adults and three children stood listening to Maya explore her own relationship to Judaism.  I thought about the years we have spent in conversation about our shared culture and faith.  It is not the answers we have found together that are so important but rather the questions we continue to confront.