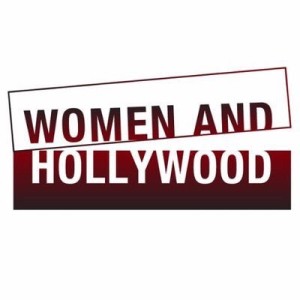 Most people imagine the structure for making a film as a pyramid with one person sitting proudly at the top. The industry as we know it endows the director with almost complete responsibility for creative expression. Members of both the production and the post-production team agree to become a part of the overall endeavor, with the awareness that their input will ultimately be guided by the vision of this individual. As a woman, I have had to meet that expectation with equal parts confidence, fear, ambition, compassion, and fierceness.

Over the course of my 30-year career in the film industry, it’s taken me an embarrassingly long time to move from seeing myself as a film student to a director. As director, I acknowledge my dedication to my practice, the fact that I have made over 30 films ranging from three to 83 minutes long, the awards I’ve received, and the money I’ve been paid to do my job.

I feel good about owning my role as a film director, but I am also really interested in exploring the impact that artistic collaboration has had on my work. Three co-directing filmmaking experiences from 1994, 2001, and 2018 shaped how I view filmmaking, and how I approach the practice. Each of these projects expanded my appreciation for the way that working closely and equally with another person or group can transform how I write, shoot, edit, show, and distribute my work.

Between 1992 and 1994, I collaborated for the first time with my sister, Dana Sachs, a writer with an expertise on Vietnam who was living in Hanoi during the very first post-war period in which Americans were allowed in the country. While making our film, Dana and I traveled from Ho Chi Minh City to Hanoi with backpacks containing our clothing and cosmetics, a 16mm camera, film, and an audio recorder. Each of us also kept a travel diary. Our film started as a road trip. Eventually, it transformed into an essay film on cross-cultural image-making and sisterhood.

It was exhilarating to follow Dana, who spoke Vietnamese and knew so much more about the country than I ever would, but in retrospect, I’m able to admit that our “collaboration” made it clear that we did not see eye-to-eye on how to construct a narrative of our journey.

Dana came to our shared experience as a journalist where the order of events and the precise text from a conversation were critical to her reporting of an event. I, on the other hand, hailed from an experimental-documentary practice where an impression of an experience was just as authentic as a precise recounting.

Each of us had her own recipe for mixing our subjectivity with our objectivity, our witnessing eye with our aesthetic eye. As sisters, we were cut from the same cloth, but our sensibilities as a writer and a filmmaker were in opposition. Only after months of disagreeing about the writing and structuring of the film did we discover that these differences formed the very backbone of the film.

The conflict between us as two makers and two sisters gave the film its tension, the rhetorical bite we needed all along. Our writerly antagonisms turned into multi-layered stories that moved beyond touristic anecdotes, toward more critical musings on the nature of tourism and representation.

After spending two years in Vietnam, Dana finally agreed to come back to the U.S. so that we could complete our narration in an audio studio. Over the coming years, we presented our co-directed film, “Which Way Is East,” in festivals and theaters around the world, including the Sundance Film Festival, the Museum of Modern Art, and the San Francisco Asian American Film Festival.

In the early 2000s, I collaborated with San Francisco filmmaker Jeanne C. Finley on “The House of Drafts,” a Bosnian-American web-art piece in the form of a virtual apartment building inhabited by imaginary characters. This was the early aughts, a time in which the world wide web was not just a place to socialize or buy things, but rather a location that allowed for enormous artistic collaboration between people living in different places around the globe. Jeanne and I jumped on the magic internet carpet to see where it would take us. Supported by grants, we traveled to the Sarajevo Center for the Arts to work with eight local media artists just a few years after the end of the war in the Balkans.

Making “House of Drafts” forced Jeanne and I to confront the contradictions of all our previous documentary work. We needed to reconcile our interest in embracing the trauma that our local partners had experienced in the war while also accepting their desire — and need — to move on in their lives. This is one of the most complicated aspects of documentary making; capturing pain, struggle, and trauma is often the hallmark of a successful production that strikes an emotional register in an audience.

We needed to recognize that the so-called “subjects” of this film project were also our collaborators, and that we had to see their needs and hesitations as part of a specific, compelling framework rather than a limitation. So, we came up with a hybrid approach, one that we hoped would serve everyone involved. We designed workshops during which everyone kept journals as characters, composites of real lives and invented personae. Through this new quasi-fictionalized lens, Jeanne and I were able to witness the detritus of the past from a distance, one that respected the trauma our collaborators had been through just a few years before our arrival. Never again would either of us see the wall between a maker and the individuals whose lives she is filming in the same way.

Between 2014 and 2018, I collaborated with playwright Lizzie Olesker on “Every Fold Matters,” a live performance, and “The Washing Society,” a related film. Both projects observe the disappearing public space of the neighborhood laundromat and the continual labor that happens there. Inspired by our reading of the 1881 strikes of African-American laundresses in Atlanta, we researched and wrote about the intersection of history, underpaid work, immigration, and the sheer math of doing laundry.

Throughout the time that Lizzie and I were creating our site-specific shows in New York City or traveling to film festivals in the U.S. and abroad, we were also dealing with our own lives and those of our families. We each commuted to teaching jobs, supported our children during their college applications, faced the death of a grandmother or a mother, and dealt with traumatizing family mental health challenges — and plenty more. At every turn, we were there for each other, as co-directors and as close friends. Our four-year collaboration resulted in a profound support structure that nourished and sustained us as women.

When I watch movies by the Maysles Brothers, the Cohen Brothers, or more recently the Safdie Brothers, I wonder about the relationships they have built through their co-directing experiences and why there aren’t more famous women sisters in the industry, as Aubrey Plaza noted in her Independent Spirit Awards monologue this past weekend. I’d love to hear more about Alex and Sylvia Sichel, the Soska Sisters, Kate and Laura Mulleavy, and other sisters who make films together.

As women in the director’s chair or anywhere else on a set, we should celebrate the bonds we build together behind the camera. Each of my co-directing experiences has guided me to a new way of thinking about the intimacy of a shared artistic endeavor and the imprint that work can have, opening my eyes to different ways of directing films — and of living. 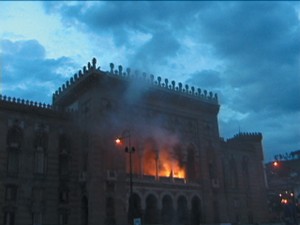 House of Drafts/ Dom Promaha is a virtual apartment building inhabited by the imaginary characters created by eight Bosnian and two American media artists.  Our characters have refused the opportunities of exile and instead have chosen to stay in Sarajevo.  We invite you to enter this apartment building through our website or by watching the tape as a way of meeting the characters who live here.

This building relies on an architecture comprised of images, sounds and text.  The project as a whole is shaped by our autobiographical experiences as they are filtered through poetic reflections, original music, and video.  From a performance artist who moonlights as a de-miner, to a cinematographer who uses his camera to turn a decaying Sarajevo into a bustling Bangkok, to a traveler caught by the inferno of a burning library  — the website and corresponding video represent our ruminations on a city and its inhabitants during and after a period of war.  On the website you are invited not only to enter and explore our House of Drafts but also to participate by leaving your own writing and images on the walls of the space.

Supported by ArtsLink, the Trust for Mutual Understanding, the Sarajevo Center for Contemporary Art and Women Make Movies. The House of Drafts videotape is available by contacting either Jeanne or Lynne by email through the site address. 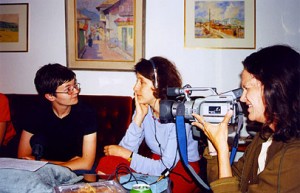 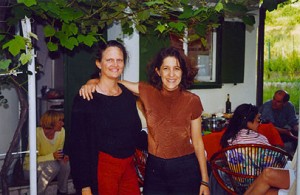 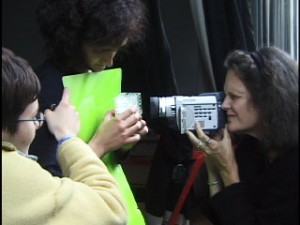