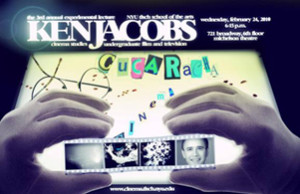 “Most movies just make the time pass. Jacobs suspends time. He holds it up to the light so you can see it, letting it flicker for us a little longer. Finally, you see everything you have been missing.” (Manhola Dargis, New York Times)

“Ken Jacobs’ teaching was ecstatic. It was like a volcano.”
(J. Hoberman, former student and film critic for The Village Voice.)

Ken Jacobs has been making avant-garde film in New York City since the late 1950s. He is the director of “Tom, Tom, The Piper’s Son” (1969, USA),” Star Spangled to Death”(2004, USA), and numerous other cinematic visions on celluloid and tape. Jacobs, who taught for many years in SUNY Binghampton’s renowned program on avant-garde film, coined the term paracinema in the early 1970s, referring to cinema experiences provided by means outside of standard cinema technology.

“It’s not natural for anybody with a sex drive to be hopeless. In fact it’s a contradiction in terms, or something. However, we can’t consider Obama’s betrayal -protecting the Bush-Cheney secrets, expanding the war/s, fucking over the peons while rewarding Wall Street thugs, etc, etc- to be leading towards anything other than ka-boom!   Sexy Ken is not hopeless. Because my interest in cinema has much to do with 3D perception I need to learn more about cockroaches, the likely inheritors of the planet,. I’m tuning my art to accommodate cockroach concerns. You don’t catch me whining; I adapt, and Cucaracha Cinema is clearly the next big thing. We’ll intersperse short and long works during the talk and the audience should feel free to say or ask anything — but stick to art, to the discussion of its intrinsic dynamics and we’ll let the rest of the world go by. There will be new works that require “free-viewing” in 3D.” (Ken Jacobs)