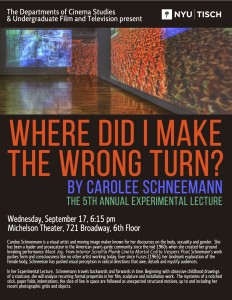 Where Did I Make the Wrong Turn?
The 5th Annual Experimental Lecture by Carolee Schneemann

Carolee Schneemann is a visual artist and moving image maker known for her discourses on the body, sexuality and gender. She has been a leader and provocateur in the American avant-garde community since the mid 1960s when she created her ground breaking performance Meat Joy. From Interior Scroll to Plumb Line to Mortal Coil to Vespers Pool, Schneemann’s work pushes form and consciousness like no other artist working today. Ever since Fuses (1965), her landmark exploration of the female body, Schneemann has pushed visual perception in radical directions that awe, disturb and mystify audiences.

In her Experimental Lecture, Schneemann travels backwards and forwards in time. Beginning with obsessive childhood drawings of a staircase, she will analyze recurring formal properties in her film, sculpture and installation work. The mysteries of a notched stick, paper folds, indentations, the slice of line in space are followed as unexpected structural motives, up to and including her recent photographic grids and objects.