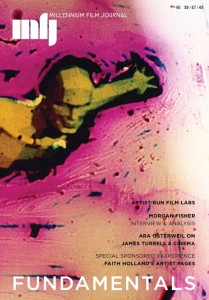 I have found several of Lynne Sachs’s films unusually disarming. Wind in Our Hair starts by just hanging out with four barely adolescent girls and seems to drift with them to no evident purpose; one is tempted to say that the attention and impressionistic, closely shot fascination comes from a mother’s affection that a general audience has little reason to feel. By the time a narrative event starts to shape the film, we sort of know these girls, or we start to feel that we are among them by way of the film’s stylistic drifting. A non-incisive drift transforms itself into a thickening bundle of barely perceptible but compelling discourses through which one finds oneself caring about the characters, not as individualized, biographical characters, but as female beings drifting toward a world that is itself drifting toward sexual and political fission, a fission that might be disastrous or revolutionary. The energy that would feed that fission is felt in the experimental music of Juana Molina that accompanies the transcendent avant-garde film poem of the end-credits—the drifting girls have suddenly exploded into articulate girl-power and woman music, just as the drifting Lynne Sachs-made film explodes into incisive experimental film. The stirring success of the music and of the film’s coda suggest a positive future for these drifting girls, while the discourses woven finely into their lives during the entire film remain frighteningly daunting.

There is an analogously disarming feel in Drift and Bough, though it is a totally different kind of film with no character development at all. There I was disarmed by the unassuming succession of art-photo shots of snowy Central Park, shots that seemed pretty ordinary, but that again gently drifted toward a richer collection of elements, such as the graphic lines that did things like scale shifting. The lines of duck trails through the ice-pack—lines that “drew” a kind of benign insinuation into a cold world—seemed to help effect an insinuation into my affect. By the time that film ends, I have been drawn, partially consciously, into a meditative state that I wanted to resist at its beginning. The ending—with people moving about and with bicycle taxi and camera both drifting to the right—was a break in that mood, but it still maintains some of the meditative mood through the realization that a barely perceptible superimposition of nothing very distinguishable has occurred mysteriously for the first and only time in the film.

The disarming feeling in Sachs’s films is especially strong in Your Day is My Night. Again the film starts by hanging out with some ordinary people, in this case Chinese immigrants in a confined space doing ordinary things. We gradually meet these people by name and hear them interact and tell stories. I won’t try to develop how that works, but will just say that somehow this ordinariness changes into—not just the liking and caring about the characters that one can see in numerous effective documentary films such as Salesman and Fallen Champ and The Square and American Pictures, or in the ur-documentary Nanook, and even the surreal Act of Killing—the ordinariness in Sachs’s film changes into something more than those films’ liking of or sympathizing with characters, something more like loving those characters, though that seems a bit strong.

My main point is the experience across several films of this imperceptible transformation from a disarming ordinariness to something strongly opposite. The kicker for me with Your Day is My Night was that I first experienced the film as a documentary, not as a scripted film with actors performing characters via learned lines; thus, my feeling of being disarmed extended to the ontology of the represented reality. That reversal of expectation, from something like Direct Cinema to a set of carefully researched and scripted performances—including the insertion of a “fake” character, Lourdes—comes at different points in the film for different viewers, but that doesn’t really change the reception structure of the film, or the films discussed above—they have little or no character or story arc but have a reception arc that moves one from being disarmed, even being uninterested and dubious, to something stronger than caring and understanding.

Sachs’s refusal to romanticize the glimpses of hopefulness, and her ending of the film with a quotation that re-affirms the power of the world’s alienation, are important contributions to the depth that the reception-arc achieves. Though the film finally leads into territory beyond the opening close-shots of packed human flesh, beyond the later medium-shots of crowded beds within crowded rooms, and the still later long-shots within crowded apartments within a crowded neighborhood of one of the world’s most crowded cities…though the film leads us beyond this over-determined within-ness to other, less impacted parts of the city, indeed leads us to a bridge that Lourdes—the outsider—introduces to Haung, one of the Chinatown shift-bedders—though the film takes us out there to that suggestively transitional bridge, nevertheless the viewer remembers what Haung has said earlier in the film that he has no benign means to get out of this life buried deep within the world situation. He will not ever be able to go home to see his children and he will have to kill himself when he reaches retirement age, perhaps by jumping off a bridge, he says. We remember that line when we see him on the bridge with Lourdes, but we also see that Lourdes has benignly infected his alienation, and has infected the entire over-determined within-ness of the characters’ lives and of the film’s structure. The deep within-ness of the characters’ situations has been broached by the character Lourdes, and by Sachs with her bizarre idea to make a film of these unknown Chinese and the more bizarre idea to introduce a Puerto Rican immigrant deep into this pervading within-ness; Lynne Sachs herself has infected the characters’ alienation, for real, by making this strange film, and thus Sachs opens the documentary people, who play themselves, to Sachs’s world and to the film’s audience. And she opens the viewer to a well-hidden within-ness, through documentary explorations that go deeper than Direct Cinema. All this in a way that is so disarming. 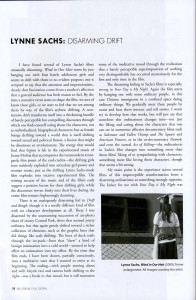