This Sunday night I will show Same Stream Twice a new short film I made in collaboration with my daughter Maya Street-Sachs in this program at Microscope Gallery in Bushwick, Brooklyn.   As some of you know, I was very inspired by conceptual artist Mary Kelly’s Post Partum Document in the early 90’s so I am excited to see the interview with her that is part of this program. I am also curious to see the piece by Linda Montano and her daughter. Linda is the performance artist who wore and lived in monochromatic colors for seven years in the 1970s.
Maya and I will both be at Microscope. I hope you can join us.
Lynne

With women issues at the forefront of recent political and social discourse, we present an evening of videos by working women artists including Catherine Elwes, Marni Kotak, Linda Mary Montano and Lynne Sachs concerning motherhood. The program features original video works and a rare interview with artist Mary Kelly, covering four decades from the setting of 70s feminism, where motherhood was often marginalized, to today’s over-the-top celebration of mommy culture.

The common element in these very different  approaches to the experience of motherhood and the mother/child relationship is the elevation of the personal daily experience. Each of the works – even when unstated – is also a collaboration with the artist’s son or daughter, or in the case of one, with her own mother.

“There is a Myth”, Catherine Elwes, video, color, sound, 19 minutes, 1984
A single breast fills the screen and is repeatedly pummelled by the infants hand. These brutal caresses soon produce the desired effect and milk oozes from the swollen nipple. The viewer, deprived of any conventionally sexual reading, is left to confront or repress pre-lingual memories of the physical and psychological pleasures of lactation.  — C E

“Little Brother”, Marni Kotak w/ Ajax Kotak Bell, HD video, color, sound, 12 minutes, 2012
The latest in series of collaborative video works in which the artist equips her young child with a video to record his daily activities and the world he encounters. The featured segments were recorded during the past month.

“Same Stream Twice”, Lynne Sachs with Maya Street-Sachs, 16mm b&w to DVD, 4 minutes, 2001-2012
My daughter’s name is Maya. I’ve been told that the word maya means illusion in Hindu philosophy. In 2001, I photographed her at six years old, spinning like a top around me. Even then, I realized that her childhood was not something I could grasp but rather – like the wind – something I could feel tenderly brushing across my cheek. Eleven years later, I pull out my Bolex camera  once again and she allows me to film her – different but somehow the same. — L S

In addition, a 17 minute segment from a rare interview with artist Mary Kelly discussing her works including her influential work “Post Partum Document”. 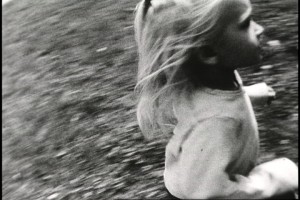 Can you talk a bit about your background and what led you to filmmaking?

As a girl, I always loved to paint and write poetry. Since I had never

seen an experimental film, I had no real  desire to create one. Then I

happened to stroll into some films by Marguerite Duras and Chantel

Ackerman in Paris when I was about 19. Like a flash of lightening, I

Can you talk about a moment, a film, a screening that really

inspired you to become a filmmaker?

Looking back on the influential films I saw as a child, I think I

Jack” by Tom Laughlin, “Walkabout” by Nicolas Roeg, and “Children of

Paradise” by Marcel Carne. These were movies I saw as young person

that turned my world upside-down. “Billy Jack” is an intense, very

political, very macho, kind of hippie movie that I am embarrassed to

What is the genesis of “Photograph of Wind”?

One spring afternoon in 2001, I was standing in my backyard watching

my daughter Maya playing in the grass.  As I stared intently at her, I

realized that my relationship to her fleeting youth was somehow

who is riding with blissful abandon on a horse at the beach.  Oona is

free to run with the animal wherever she may choose, and yet she is

somehow lovingly reigned in by the gaze and concern of her mother.

obscurity Gunvor weaves an intimate, oneiric homage to her daughter.

On the soundtrack (recorded with Patrick Gleason and inspired by

American composer Steve Reich), she creates a musical litany made of

the sound of Oona speaking her name over and over. Perhaps it was

my daughter running as many circles as she could before falling

dizzily to the ground.  I called this short cine-poem “Photograph of

What were some of the film’s influences?

children. I am not sure where he wrote this but somewhere he used the

expression “photograph of wind” and it spoke to me in a profound way.

Can you elaborate on the process of making the film? How

important is the process to you?

Sometimes I make very complex collage films. This is just the

opposite. “Photograph of Wind” is a very spare work that combines two

shots. In these two images, we see the collision of black and white

and color, a human being and the leaves of a tree.  But in the

juxtaposition, I think we witness the sense of a fleeting childhood

and the last moments of summer. No matter how tightly we grasp the

moment, it will go away.

Can you contextualize “Photograph of Wind” in relationship

to your body of work overall. Does this film relate to themes that you

typically explore or is this film a departure?

I have been exploring women’s experiences through so much of my work,

Objects” (1986).  I like investigating my own discoveries about my

life – from getting my period, to having children, and all the things

in between.  Specifically, I have made about five films with my

daughters. We all enjoy diving into the creative process together.

filmmaking? (Some women have felt that if they were to be taken

seriously as filmmakers they had to be “closeted” mothers or choose

between the two. Is that something you have encountered?)

flower bursting from a branch – carrying a camera or dragging along

experience.  On a more somber note, I also made a film about an

political conflict.  The film is called “States of UnBelonging” and

mother and an artist.

Does your role as a filmmaker inform how you see yourself as a mother?

I think that by being an artist, and in my case a filmmaker, we can

share an excitement about making things with our children. Life feels

like a universe of possibilities, and the measures of success are not

so much commercial as personal.

Did you have reservations about including your kids in the

project? Can you share a story about the process of working with your

I did not have reservations.  Making this film with my daughter was

just a continuation of our play – at least for her.  For me, of

course, I had to spend days in the optical printing room transforming

the original footage into the dreamy, high-contrast motion you see on

How do you balance teaching, making films, your family, life,

etc? Can you share a day in your life doing this balancing act?

I am not sure I have found a balance, but I guess that I try to

translate the joy I have for teaching to my relationship with my kids.

Both are oriented toward young people of course, but my students just

stay the same age and my daughters grow up. The hard part is not to be

too much of a teacher with your own children.

We have shared the rationale behind putting together the Kid on

Hip program. Do you have any thoughts on being included in this group

of films as a screening program?